EVERY GOTDAMN DAY, ALL DAY black women and girls report having to endure mockery, ridicule, intraracism (a.k.a. colorism), sexism, and misogynoir (anti-black misogyny) not only from whites, but from MANY in our own “community” not only offline, but online and the shit is baaad,  OUT OF CONTROL, and  it’s not getting any  better. This is the typical day in certain Negro spaces online in which Negros along with everybody else create racist, colorist, misogynoiristic memes and tweets about Black Women and Girls. Demonizing, demeaning, and de-humanizing Black Women and Girls is a past-time on social media and THE SO-CALLED BLACK COMMUNITY SAY OR DO ABSOLUTELY NOTHING ABOUT IT BUT LAUGH AND MOCK, SHARE AND RE-TWEET, OR JUST REMAIN SILENT .

In the last year or two I have come to realize that BLACK WOMEN AND GIRLS ARE GREATLY DE-VALUED AND HAVE ABSOLUTELY NO PROTECTION FROM ANYONE, NOT WHITES, NON-BLACK POC, AND EVEN  OUR OWN “COMMUNITY.” The late great brother Malcolm X said, “THE BLACK WOMAN IS THE MOST UNPROTECTED PERSON IN AMERICA”. He knew exactly what he was talking about and he knew that the black collective was guilty of not protecting their women and girls. DAMMIT where is Al Charlatan, “Messy” Jesse Jackson, the NAACP including ALL other black MIS-leaders to organize the so-called black community in protests and rallies against this horrific behavior!?! Where is the National Council of Negro Women?!? Where are those “Black Greek” sororities that so vehemently protested to take “Sorority Sisters” off vh1? I’m not surprised at whites and others not saying or doing anything or protecting the black woman’s true character and image from erasure and demonization because we KNOW they don’t value us at all, but it’s ESPECIALLY very,very heartbreaking to a lot of sistas that many in the so-called black community either ridicule, mock, share, re-tweet, or just remain silent. In addition, when whites and others see “black” people doing this to their own women and girls this opens the door for them to join in too   “cause if the black community doesn’t mind mocking and ridiculing their own women and don’t say  or do nothing then it must be ok for us to do it too.”  This is exactly how they are thinking! AND BEFORE SOME PEOPLE SAY THAT I’M SINGLING OUT SOME GUILTY PARTIES AND NOT OTHERS, SOME BLACK WOMEN AND GIRLS ARE NOT INNOCENT EITHER. EVEN MANY BLACK WOMEN AND GIRLS THEMSELVES THINK THESE MEMES AND TWEETS ARE FUNNY AND NO BIG DEAL. SOCIETY ( VIA RACISM WHITE SUPREMACY PROGRAMMING) AND THE SO-CALLED BLACK COMMUNITY HAS DONE A TERRIFIC JOB, CONSCIOUSLY AND SUBCONSCIOUSLY TEACHING BLACK WOMEN AND GIRLS NOT TO VALUE THEY’RE OWN DAMN SELVES! SMDH

THIS AND MANY, MANY OTHER INCIDENTS THROUGH THE YEARS (DOCUMENTED AND UNDOCUMENTED), ON AND OFFLINE MADE ME COME TO THE CONCLUSION THAT THE SO-CALLED BLACK COMMUNITY SUBCONSCIOUSLY HATES BLACK WOMEN AND GIRLS.

Now take a look at these tweets ya’ll from “black” men themselves. There’s a white boy and others in there taking a shot at sistas right along with ’em. smdh *Below are a few reader responses to these disgusting tweets*

there is a reason why Black Girls Rock exist. thats why organizations exist to uplift black girls. people refuse to acknowledge that misogynoir exists. they refuse to listen to black girls and their struggles.

This makes me sick..

They change their toon when they see a black woman dating some one that isn’t black or are dating another black woman.

They’ll complain that other races are stealing their fine black woman away from them and be jealous of them and their beautiful little mixed babies.

You can say black woman are ugly aaaaaallll you want but we know the truth: You’re scared of us, You’re jealous of us, you’re mad that we call you out on your bull shit, your worried will give you the beat down if you say this kind of shit to our face.

Black woman are beautiful, every single one, light dark tall short fat thin freckled pocked natural permed or what ever. Any one denies it is a fucking lie and should be avoided at all costs until they come to their damned senses.

“Black girls are ugly” ha! I spit on your delusions.

Re blogging this shit again just to say that sometimes i really am ashamed that I have to align myself with black men simply because there are so many of us that are self-hating and pathetic. MY MOTHER IS LIGHT SKINNED AND I FUCKING LOVE BLACK WOMEN OF ALL CREEDS AND COLOR. Fuck out of here with that “black men prefer white women because….” no nigga YOU PREFER WHITE WOMEN, dont fucking lump us all into some fucking big ass ball of self-hatred as if every black man hates the women he’s been raised around. At the end of the day I understand that the only way to distance yourself from such negativity and internalized racism is through your own actions and acknowledgement, so while my words may fall on deaf ears, still. I just want to say to every single black female that reads this I am deadass sorry we as black men say and do this to yall as if you guys arent literally the most important people in our lives. I am a Black and white biracial kid who grew up in Brooklyn, NY. I have literally watched black women fight my entire life…please dont see this post and give up. I know this post makes it seem as if your blood sweat and tears are worthless, but I swear every single drop is worth more than my weight in gold. Don’t give up on us, dont even give up on them….we’re fucking idiots yo…we need yall.

Question is, why aren’t white girls offended by this as well? They’re basically saying you ain’t shit but a dick pleasing doormat.

Now let’s take a look at some stereotypical “Daquan” memes about Black Men and boys. I bet your bottom dollar that the Negro boys and girls who laugh at the memes above would not laugh at these, they’ll pitch 10 bitches in hell, call Al Charlatan, call “Messy” Jesse, the NAACP, the press, etc. I’m telling you all that many in the so-called black community don’t tolerate this type of mess when it comes to black men and boys. And guess what,  there was a meme that was posted (I believe last year by a white person) like the ones below about black men/boys and black twitter erupted! Some have taken notice how the so-black community WILL PROTECT AND DEFEND BLACK MEN AND BOYS THAN BLACK WOMEN AND GIRLS (i.e. the so-called Black Community’s turning out in large numbers to protest and rally for justice of dead black men and boys and not dead black women and girls murdered by the police, whites, non-whites, and other blacks). WE SHOULD BE PROTECTING THE CHARACTER AND IMAGE OF BOTH GENDERS EQUALLY. These memes are NO DIFFERENT FROM THE OLD CARTOON MEMES BELOW THAT WHITES CREATED TO DEMONIZE AND DE-HUMANIZE BLACK PEOPLE BACK IN OUR PARENTS AND GRANDPARENTS DAY. I’VE NOTICE HOW SOME OF THESE NEGROS THINK THAT IT IS OKAY TO MISTREAT OTHER BLACK PEOPLE, BUT AS SOON AS A RACIST INCIDENT WITH WHITES JUMPS UP  THEIR  BLACK ASSES ARE PITCHING 10 BITCHES IN HELL. CAN YOU SPELL H-Y-P-O-C-R-I-T-I-C-A-L! IT IS IS NOT OKAY FOR WHITES OR OTHER NON-BLACKS TO MISTREAT US AND ITS NOT OKAY FOR BLACKS TO MISTREAT OTHER BLACKS! 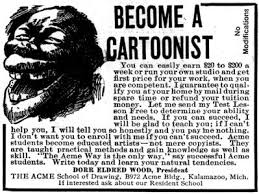 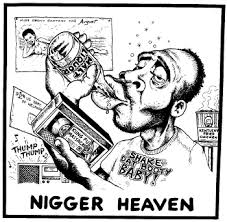 ALL OF THESE MEMES OR TWEETS I POSTED BY BOTH RACIST PALE DEGENERATES  AND THEIR COLORIST, MISOGYNIST SELF-HATING NEGRO BOYS AND GIRLS ARE NO DIFFERENT FROM EACH OTHER. ALL ARE DEMEANING> DEGRADING, AND DISGUSTING WHETHER A  PALE DEGENERATE MONSTER OR A  NEGRO IS DOING IT!

57 thoughts on “Highly Insulting Memes and Tweets That “Black” People/ “Black Men” Post on Social Media About Black Women and The So-Called Black Community Doesn’t Say Or DO ABSOLUTELY A DAMN THANG ABOUT IT….BUT LAUGH AND REPOST THEM, OR JUST REMAIN SILENT!”